The town of Blanca is located in the heart of the “Ricote Valley” (also known as the “Moorish Valley”), a historic zone of the Region of Murcia, Spain, and one of the most beautiful spots in the fertile Murcian plain. Surrounded by beautiful landscapes that run between fruit trees, palm trees, orchards, irrigation channels and canals, it also has good communications: close to the airports of Murcia and Alicante and less than 1 hour by car from the fantastic beaches of the Mediterranean Sea. In short: an idyllic place to own a property.

In November 2004 the Blanca Town Hall and the developer Consorcio Inmobiliario Mare Nostrum, S.A. (CIMNSA), in collaboration with the marketing companies Virdemar Inmobiliaria, S.L. (from which shortly afterwards Sunscape Property Investments, S.A. would emerge) and Tosega 2008, S.L. reached an agreement for the construction of the large residential and sports project Casa Don Juan Golf Resort.

The project included the creation of a golf course and some 7,500 residential units: villas, townhouses, apartments and duplexes, in an area that would give rise to a city of more than 20,000 inhabitants. 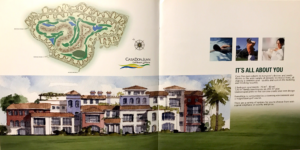 SunScape began to promote the homes that would be built to receive down payments. The promoter assured that the houses would be built in 2008 and asked buyers for a deposit. In addition, some well-known banking institutions endorsed the operation, giving confidence to those who wanted to allocate their savings to this investment in “a new concept of quality of life”.

But the minimum conditions required by law were never met: no authorization for water supply by the Hydrographic Confederation, no declaration of environmental impact, and no building permit. Nor were the warnings given by the environmental groups at the time about it being unclassified land.

The scarcity of natural resources and urban infrastructure in a municipality with no more than 6,000 inhabitants made it ultimately unfeasible to begin any works, and of course it was not possible to lay a single brick.

Logically, the clients wanted to claim the amounts they had paid on account as a reserve for the purchase of their homes, but they did not find where or to who do so, since the sales companies had closed their offices, their contacts had disappeared and nobody wanted to take charge.

Some clients decided not to go ahead with their claim process, as they found themselves in insolvency and bankruptcy proceedings of the Sunscape marketing company and the CIMNSA developer. But at Abolex Abogados we know that their money can be recovered under the protection of Law 57/1968, as our clients have also been able to prove when they have used our services (https://www.abolex.es/abogados/opiniones/).

You can rely on our experience and success in the application of the law so that we can start recovering what belongs to you (amounts paid on account and corresponding interests), as we will make the appropriate claims to the banking entities, which are the ones obliged to respond in these cases, without them serving as an excuse for an alleged lack of knowledge of the matter or an alleged insolvency of the companies that kept your money.

Contact us now and we will study your situation, so that you can recover the amounts you paid along with the corresponding interest. We will guide you and accompany you throughout the process: from the moment you tell us about your case in a first message, which can be accompanied by the documents that allow us to have a greater knowledge of the matter (contracts and proof of payment), until we receive the corresponding Court decision. And, please, always bear in mind our commitment: no win, no fee.

Consult now free of charge and without obligation with Abolex Abogados

Carol Russell
17:17 04 Apr 19
Martin de la Herran and his team have just worked a miracle. They have managed to get back our deposit for a property deal which fell through, when the developer declared bankruptcy and we discovered we had no bank guarantee after all. I can’t describe the amount of stress this has caused to both myself and my husband over the years. This was almost 15 years ago and we thought we would never see our money, ever again. Our life savings gone! However, a couple of years ago, a friend of mine put me in touch with Martin..and it’s the best thing I have ever done. Martin managed to get back not only our deposit of €70,000 ++, but with added interest too. We are overwhelmed to say the least. If anyone reading this is in the same situation as us, and has any doubt as to whether to ask Martin for help or not, then this is my advice...DO IT. You will not be disappointed. I know he will succeed for you as he has with us!! Thank you Martin and team for all you have done for us. We cannot thank you enough.

You can find out more about which cookies we are using or disable them in the SETTINGS.

This site uses cookies so that we can provide you with the best possible user experience. The information in the cookies is stored in your browser and performs functions such as recognizing you when you return to our site or helping our team understand what sections of the site you find most interesting and useful.

The strictly necessary cookies must always be activated so that we can save your cookie settings preferences:

If you disable this cookie we will not be able to save your preferences. This means that every time you visit this website you will have to enable or disable cookies again.

This website uses Google Analytics to collect anonymous information such as the number of visitors to the site, or the most popular pages

The _ga, _gat_gtag_* and _gid cookies are from the Google Analytics web analysis service. It uses an anonymous user ID to count each user's unique visits, the pages they browse, the bounce rate, the country they came from, or the search words they used to reach the site. You can read more about the use of Google Analytics cookies.

Please activate the strictly necessary cookies first so that we can save your preferences!

Cookies are small text files that can be downloaded to your computer or mobile device when you browse most websites.

Cookies are primarily used to identify your login, remember your preferences, or help you complete tasks without having to re-enter information when you browse from one page to another or when you visit the site later.

Each time you open a new page, the server may receive the values of the cookies that were previously saved and return the page with related or personalized content.

Depending on their lifetime, there are session cookies when they are deleted when you close your browser; or persistent cookies if they remain on your computer or mobile device for a predefined period of time.

Cookies installed from a domain managed by the publisher itself but used by a third party to collect information cannot be considered as own cookies.